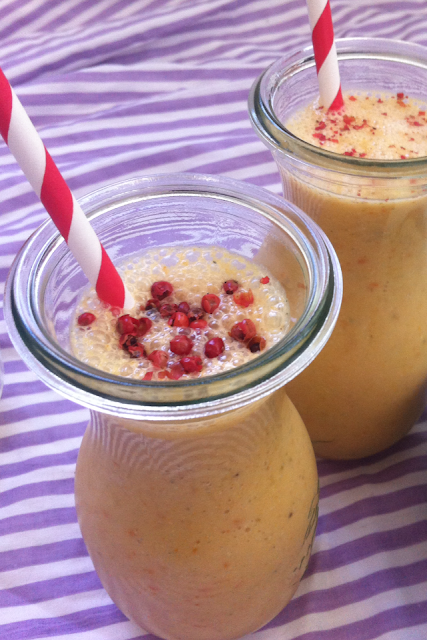 Like I said in my last post, although it is getting cooler, I'm not ready to say goodbye to smoothies.  But I am adapting them to make them include some of my favorite fall flavors.  One of those flavors is persimmon.  Persimmons are supersweet and delicious.  If you haven't had one, I'd liken them most to plums without the tartness.  They also have more fiber than apples in addition to Beta Carotene, Vitamin C, and a host of other nutrients.

This recipe also uses pink peppercorns.  You may not realize how different they are from black peppercorns.  They are flaky and hollow, with a milder spice than black peppercorns, and a citrus-like flavor that pairs wonderfully with fruit.  Give them a try, but of course the smoothie will still taste delicious without them. 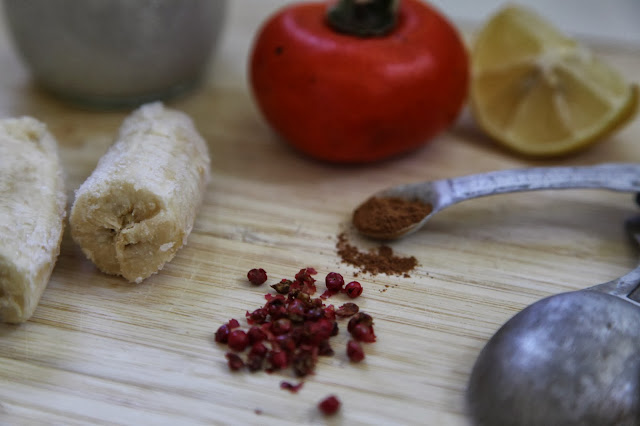 1. Put the water and hemp seeds in the blender and blend until you have a creamy white hemp milk.  You do not need to strain the hemp pulp.  If you do not have hemp seeds, leave out the water and instead use 3/4 cup of milk or milk alternative of your choice.

2. Add all the other ingredients and blend until smooth.

3. Garnish with pink peppercorns and serve. 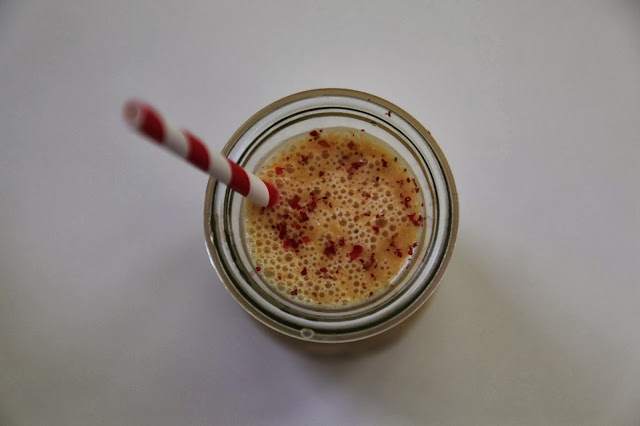 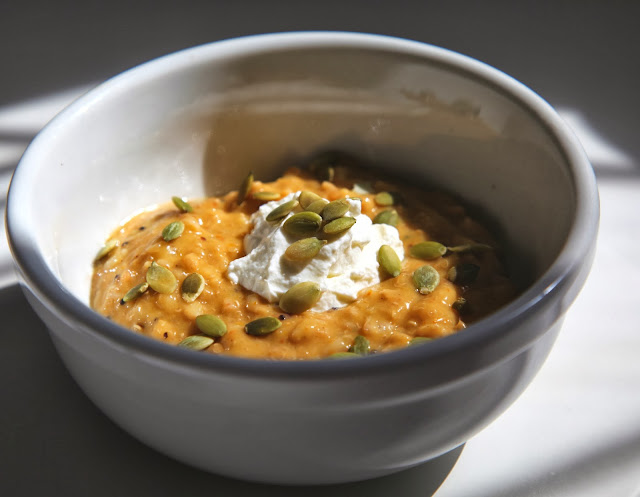 Autumn is undeniably here with its chilly mornings.  And while I'm not quite ready to say goodbye to smoothies, I have been waking up craving warm cooked breakfasts.  One of my favorite breakfast recipes comes from the incredibly talented Sarah Britton of My New Roots.  She is an absolute genius in the kitchen and I've never tried a recipe of hers that I didn't like.  Her pumpkin pie amaranth porridge is incredible and just what I've been in the mood for lately.

Unfortunately, when I am in a hurry in the morning it can be hard to find time to cook a hot breakfast.  So I decided to make my version of Sarah's pumpkin porridge in a slow cooker.  You don't have to stir constantly or wake up early.  Just throw the ingredients in, turn the slow cooker on, and wake up to a hot healthy breakfast. 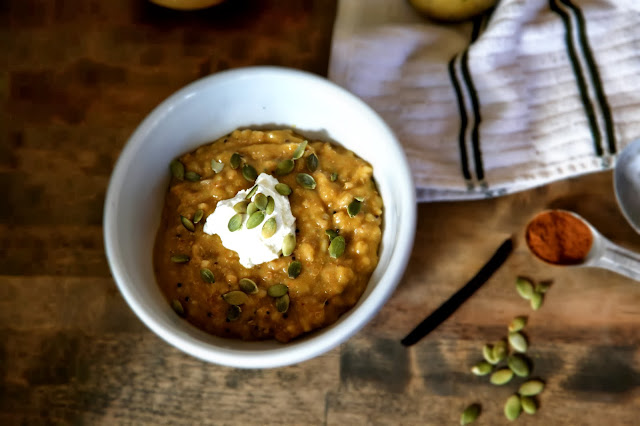 For variety and nutrition's sake, I used three types of "grains" for my porridge: amaranth, quinoa, and oat groats.  Amaranth is a grain-like seed that is packed with protein and calcium.  Quinoa is a good source of complete protein as well.  I like to use whole oat groats when possible because they are the least processed form of oats and they are full of soluble fiber.  These three cereals together make for a nutrient packed bowl of porridge. 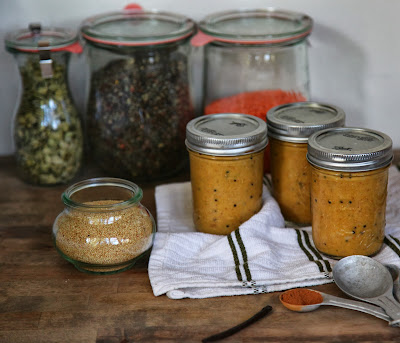 Put all ingredients in your slow cooker and whisk to remove any chunks.  Turn setting on low and get some sleep.  When you wake, stir porridge and add sweetener of your choice.  Serve with nuts, seeds, fruit, coconut, or yogurt on top.

This makes a large batch.  I recommend making it early in the week and putting leftovers into mason jars so that you have individual portions in the fridge ready to grab and go for the week.  Enjoy! 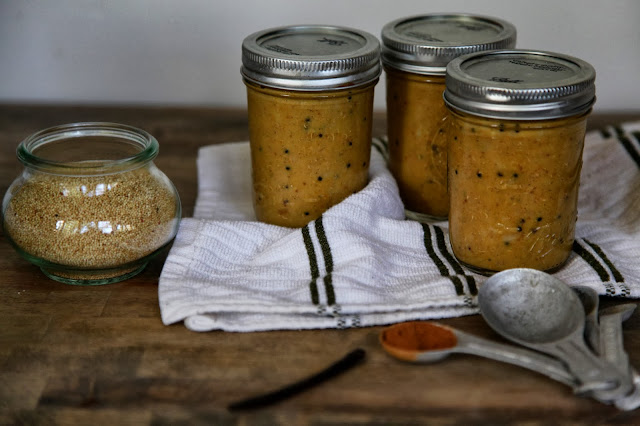 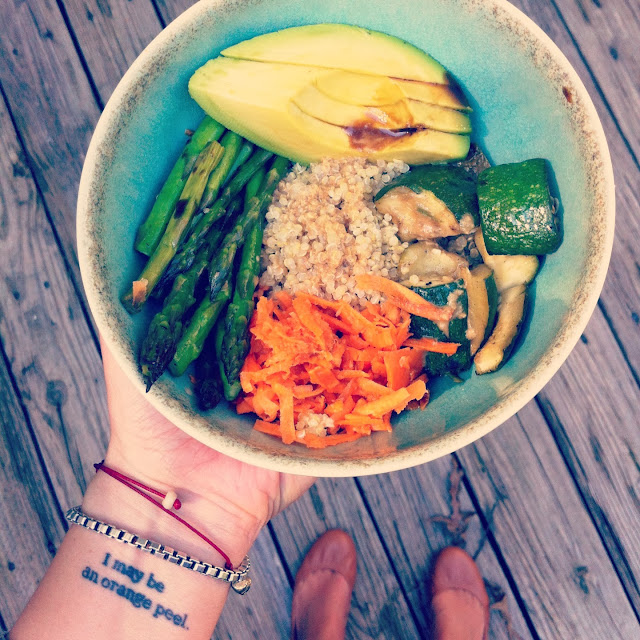 Last week marked the autumnal equinox, the end of summer and the beginning of fall, a day when sunlight and darkness are equal in balance.  As this day approached I was feeling completely out of balance.  In an effort to "reset" myself, I decided to try a juice cleanse.  I had tried one five years ago, but I wasn't as invested in my health at that point in time, so I decided to give it another shot.

While I know that many people benefit from juice cleanses, I can now safely say that juice fasting is not for me.  As someone who typically has a good relationship with food, I suddenly felt obsessed.  I was so hungry that I was craving junk foods that have never interested me.  I don't normally have any "rules" about what I eat.  I simply eat what appeals to me while trying to make the most nourishing choices I can.  But as soon as foods were off limits, they were all that I could think about.  Half way through the third and final day I decided to break the cleanse.  I was so hungry that I knew if I kept it up I'd end up eating something unhealthy.  By stopping early I was able to make a more sensible yet delicious choice: quinoa and avocado veggie bowl with tahini lemon dressing. 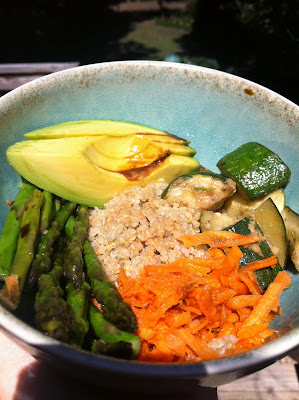 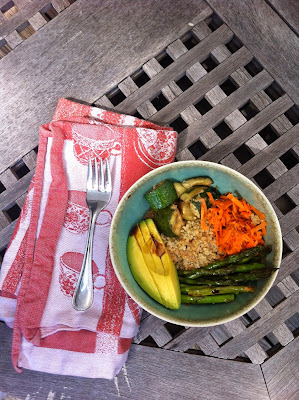 I'd rather create an ongoing healthy lifestyle than do a few days of extreme cleansing.  But that is what works for me.  It may be worth trying a juice fast to find out what works for you.

You've probably heard plenty about quinoa as it has become popular as a superfood, grain alternative. Although quinoa cooks and tastes like a grain, it is actually a seed.  Grains are incomplete proteins, which is why it is recommended that they be paired with beans and legumes to provide the complimentary amino acids.  Quinoa is a complete protein on its own.  For an added nutrient boost, try red or black quinoa which have even more antioxidants.

I recommend making a large batch of quinoa when you make this.  That way you already have it on hand for a breakfast porridge with almond milk and fruit or in place of rice for dinners throughout the week.

1. Spread zucchini and asparagus out on a baking sheet and drizzle with coconut oil. Add a pinch of salt and pepper and roast for 15 minutes at 400 degrees or until slightly browned.  Flip the veggies halfway through cooking time.

2. In a small bowl whisk together tamari, tahini, lemon juice, water, and honey until smooth.

4. Pour dressing over the veggie bowl and serve. 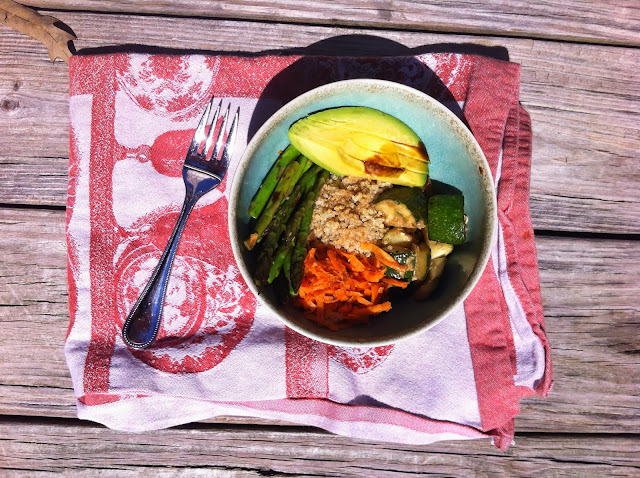 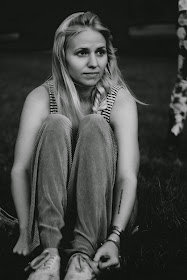